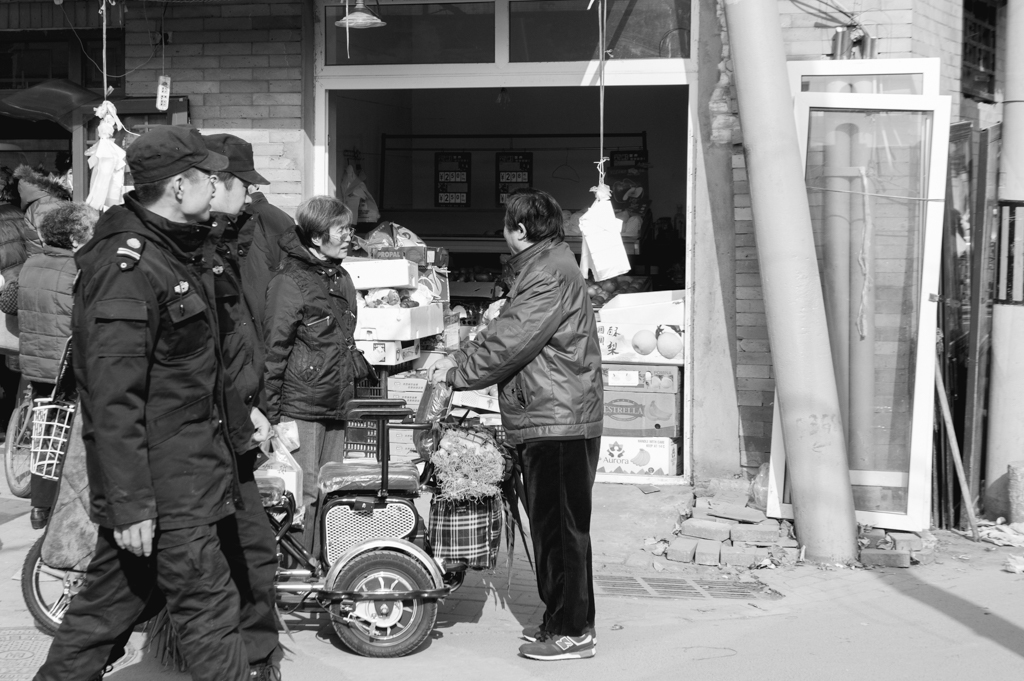 It was 10 clock in the morning, and I was there to get my dogs breakfast. When I asked the woman in the shop selling me dog food, she smiled with her lunch box in hand and chopsticks in her mouth. Then told me that starting today; they can no longer keep their products outside of the stores. Every single item needs to be inside, because they want this street to be an easy passage rather than a crowded slow market.

In general this is a non-issue issue, but the problem is that the shop owners wont have enough floor space for their assortment now. When stocking up on goods they were counting on space that now isn’t available. The first meter outside the shop was used as part of the store for years and years, not just here, but everywhere in Beijing, in China. That is just how things are done and business run. With this way of doing things, the floor space inside functions as storage when they are closed for the night. So now, when everything needs to move in, they have too much stuff to display neatly. Everything ends up on top of each other. The street is now nice and empty, but the stores are chaotic. For now at least, I’m sure they will figure it.

Headcount on the cops gave me at least 12. They all seemed calm, even happy when basking in the sun. Not all of them needed to be telling people what to do at all times, so I guess the number of them is just a visual key to the shop owners that this is serious business. Most of them was just standing around. Kind of like in Sweden when communal workers are getting anything done. 7 guys will arrive. 1 will be digging, 1 will be in the big machine moving rocks around and the rest will be commentators with cigarettes in hand. So Sweden and China aint all that different.

Got some pictures from there because I visit this market a lot and today was a historical thing, I felt. Kind of like that one time last year when it was covered in snow. This morning I didn’t have my camera when the shops I am familiar with were moving things inside, and when I got back with my camera the cops had moved on to another of the street. I managed to capture the results, not the process. At the other area I didn’t get close because I decided to leave as soon as I heard the policemen poking each other about the foreigner taking pictures. That was que to split.