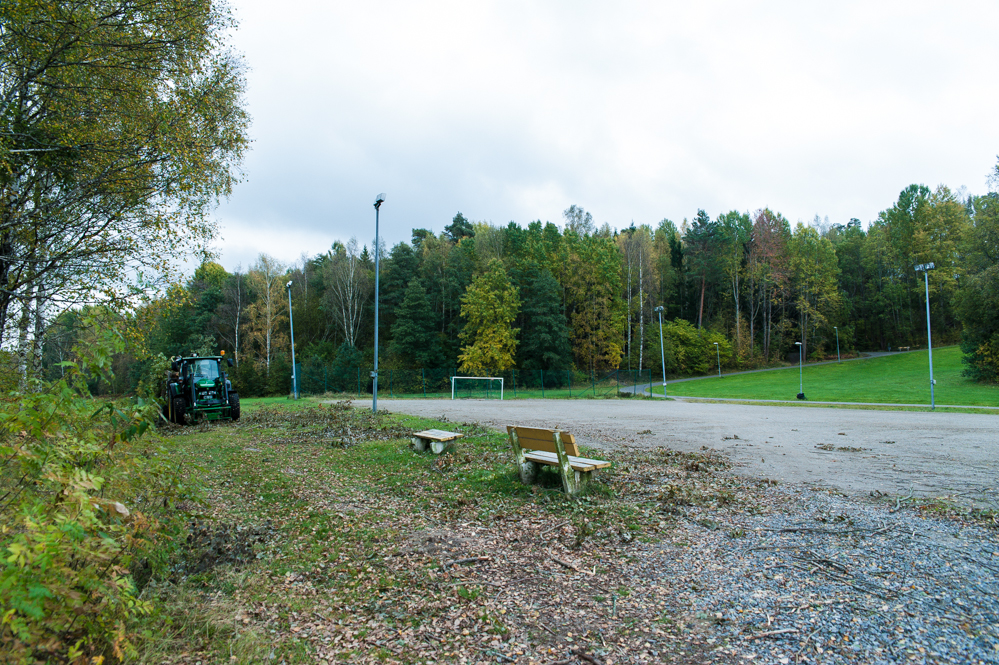 Fågelsången, or The Birdsong is the name of this area. Its bigger then the picture and its basically just a big field grassield where people walk their. Schools also bring classes there for sports. 1st of May bonfire is held there, a temporary amusemenpark opens up here ont his football field. During winter its turned in to  hockefield. This place is just a rock throw from my house, so Ive spent a lot of time there. Smoking cigarettes, walking my dog, kissing boys and drinking cider. Like any normal teenager in Salem.

I grew up a 30 minute train ride from Stockholm innercity, in a suburb called Salem. Pronounced Sawlem. Its mostly just old people, families, a lot of babies and vegetation. Lots and lots of vegetation.
Ofc we also have the young voters who votes for the nationalistic racist parti in Sweden and I apologize we havent managed to save them yet. But they will come around. Our old people are great. They say hello, they seem happy and they read newspapers on the benches around the bicycle roads in the sunlight. They are adorable! And healthy! And welldressed! The young teenage nazists are just on a crooked path to becoming one of those adorable oldies.

What to say about the cigarette-smoking pregnant teenagers comparing boobjobs, I dont really know. No comment, just my face buried in my hands while shaking it sighing. But not all teenagers are like that. Others manages to not listen to the people around them and media, instead they listen to themselves. Spend time being alone, dreaming & thinking. Realizing that tey have the power to change everything that they lay eyes on every day. They can move. They can change. Other spend time not paying attention to their own inner voice an gutfeeling about right and wrong. Whats worth while and not. Instead they listen to the voices around them that speaks first or loudest. Usually these voice are followed, cus its nice to have someone telling you what to to think and do, when you dont really know yet yourself. The problem is, when you get stuck and forget that you actually were gonna find your own path at one point.

Spirituality will save anyone. Because its simply boiled down to, making sure you are not running yourself over by not paying attention to your gut. Its that simple. Just sit for 2 minutes, close your eyes and feel. Let your mind wander. Thats all. It will change your life. New thoughts will appear. I promise.

Belive it or not, but this is a great place to live. You just need to keep reminding yourself through your teenage years that this is not IT. You WILL have a GOOD boyfriend one day and you CAN do WHATEVER you want. Keep in mind how big the world is, and how incredibly small this town and all these people are in comparison.

Or the bitches around you will destroy you.