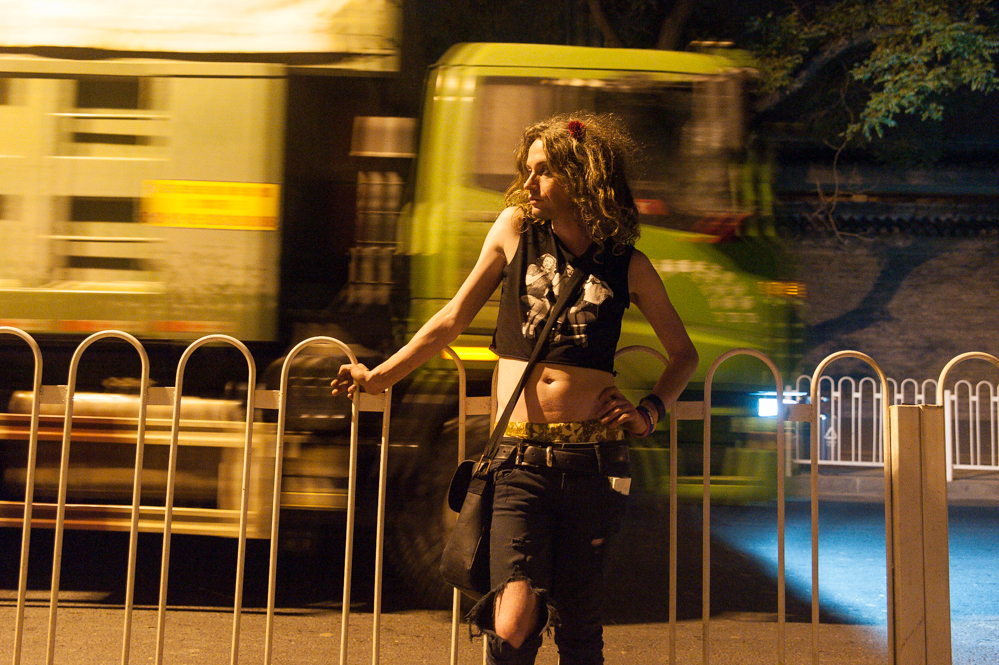 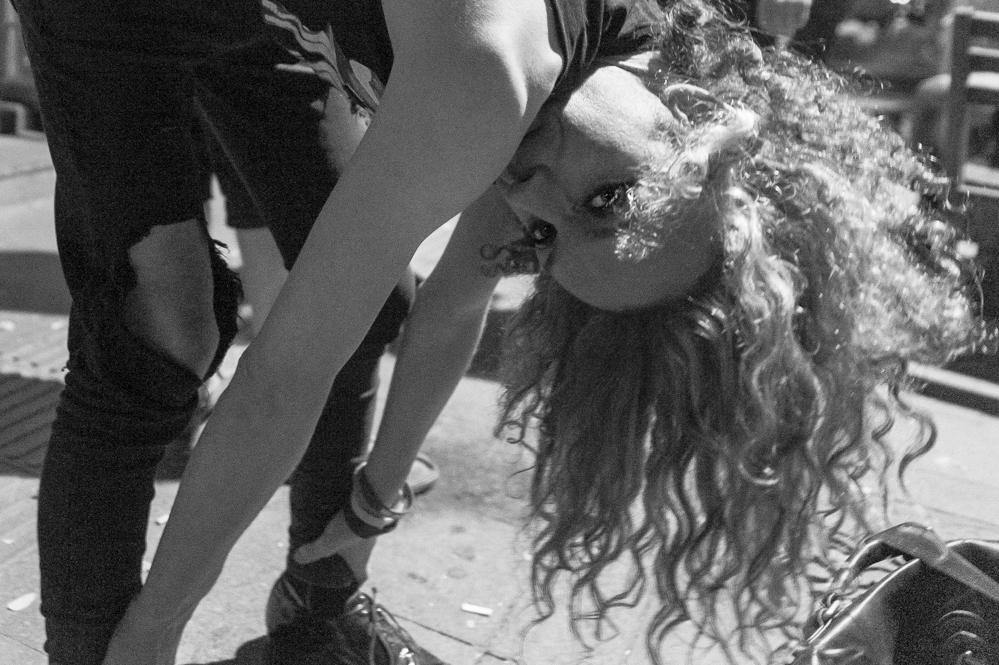 Before today I have been looking for reasons to write and keep a daily public blog. I thought I needed to change my life and apply myself to journalism. I realized today when waking up after a few drunk hours of sleep on the couch, that trying to create content is retarded. I don’t have to create shit. What I do allready is content! Why haven’t I thought of that before?! Idiot! My life is pretty sweet and has been ever sense I “finished” college and is definitely interesting enough to write about. Might sound arrogant, but I can simply compare what my life today to what it was a decade ago. If I knew then what I would be doing today, my head would go “WHAT?!” and wonder how famous I was. I highfive my 15 year old me occasionally, even though I’m not famous. She doesnt have to know everything. That poor little girl deserves the highfive!. Because she would have been satisfied and proud of herself if she could just move to the next trainstation! Instead, she is a live performance photographer in China! Ha!

Anyway… I came to this conclusion: If your life is not interesting or eventful enough for a blog, maybe you should get out more? Honestly, Its a good indicator. Would anybody at all in the world, except for parents, grandparents, and stalkers read it? If nobody whatsoever, your life probably sucks. Do something about it.

I decided, that what I did last night, is interesting. Even though it was just one night of many, this specific one, is special. I went to a new bar called What now?! with this new guy who was/is/ the lead singer of a Irish Punkrock band called Social Handgranade. He is featured in the photo above. Social Handgranade has a songs that were played on Irish radio between Bob Dylan and John Lennon. Then he got banned. Totally cut off. Because the channel started receiving emails with complaints about his “too extreme lyrics”. So what does one do when ones band get banned off or radio, you take to China! We met at a TV studio the other day, through Lucifer, another guy I met recently. Also a singer. Lucifer is the singer in a Chinese Old School Rock band called Rustic. Both me and the Irish guy were at the studio to support Lucifer who was competing for a spot in the TV show “Rising Star”. I’m not allowed to post my photos from rehearsal yet, but I will when the show starts airing.

I met Lucifer on my way to 4 Corners to drop off my my first ever made event posters at 4C. Segway: The poster was a success! Not perfect, but cool enough to have people taking pictures of it in the bathroom where it was (and still is) beautifully framed in black and hanging on a brickwall. Anyway, I introduced myself to Lucifer because he caught my attention big time. He was wearing a flashy outfit and standing in front of a shiny chrome bicycle with wicked wheels. He looked a picture, so I needed one. During our conversation, his friend came a long. His “crazy” friend B Ge, which means like “cunt” or something in Chinese, is a semi-famous comedian who posts videos on Chinese Youtube, youku. So we made some videos where I pretend to be a gullible foreigner, a self absorbed bimbo and also, a very shitty English teacher.

Interesting enough?
Yes, I thought so.

I’m not sure who will read what I write but that will sort itself out. Earlier this blog had its only visitors located under the roofs of me and my boyfriends childhood homes. But now I’m handing out business cards like crazy, meeting tons of people who wants to see their portraits, so the site serves a real purpose now. I need a space for all of them and its here! It will come with not only pictures, but words aswell!

One more thing to clear out is why this needs an announcement. Because, I have been writing before. Not paying attention to spelling, or line break and these sorts of things. Instead I payed attention to what I can write about and what I cant. Asking myself questions like  – Who is gonna read it? – What will my mum and mother in law think? Now though, I will only pay attention to spelling, line break and those sorts of things. Not my mum and not my mother in law. I know my grandmother reads my stuff as well, but I never worried about what she thinks.  She is just way too cool for that. To sum her coolness up I will share a little shortstory. One day about 10 years ago, I got up on Christmas morning, finding my grandmother traditionally boiling carrots and potatoes for breakfast wearing nothing but panties and a Prodigy tshirt, just long enough to cover her butt. If she knew what she was wearing or just randomly pulled something out of my hardcore mothers wardrobe, doesn’t matter. I come from a line of badass women, so I cant go all neat and classy without disappointing anyone. When people ask me about my parents, they get a very unusual story in response. When young, it was difficult because I hadn’t quite wrapped my head around it myself yet. I just knew that my family was nothing like anybody elses. So putting it into words was hard and I didn’t really know how to begin. But now, when 25 old and wise, I tell my family story with ease. One day, I will tell you to.

I was just at home going through my Monkey Forest pictures from Indonesia, when I realized that I was supposed to go out and have beers with the Irish guy. I got my swag on and took off. Not very quickly ofc, but you know, in a couple of hours. “Fashionably late”, or “Too fucking late, Damn it Sanna (!!)“, is my unknown middle name. I ended up at the wrong location and because of that I missed dinner and spent way too much time in the Chinese subway for one night. Its so hot and so crowded! But I have learned that with reggae in my ears and eyes on the station board, while dancing just a little bit, so little that nobody notices, makes the whole trip much more pleasant. Maybe I am just imagining that I am dancing. I just pretend nobody is there, but not to the extent that I would be singing out loud or excessively farting. I just get nervous easily when I feel like people are looking at me and sometimes Chinese people are curious about foreigners, so I feel a little stage fright entering the Chinese subways.

Finally I got out, started walking and eventually found this dirty, narrow, smoky, little half-empty bar with a bunch of people sitting outside. The he was fiddling with a Minnesota girls hair, The Irish Guy. He was rocking his usual eyeliner and the usual head full of glittery curls together with a short black tanktop. It had a black and white 60s print of 3 posing ladies (with the same hairstyle as he himself) going  “I cant hear”, “I cant speak” and “I cant see”. Magnificent shirt! I would wear that myself. We spent the night drinking at this bar and checking out the bands. Skinbad, wasn’t really my cup of tea. Their bassplayer drew weird attention to herself. Beautiful gal, but she reminded me so much of my 12 year old English student, rather than a young woman going through a point in life where sexuality needs to be expressed. She was not wearing much at all. I do remember getting shit from my teacher when I was 15 for looking stupidly young when smoking a cigarette. That did hurt my feelings, so I should have sympathy with this girl instead of making comments about her outfit. But! Ofc my teacher was right. It was too soon for me to be smoking. But damn, maybe she is older then me. Bah, Asian girls. Impossible to freaking know. Maybe over sexualized tatooed jailbate, just happens to be her look of choice? 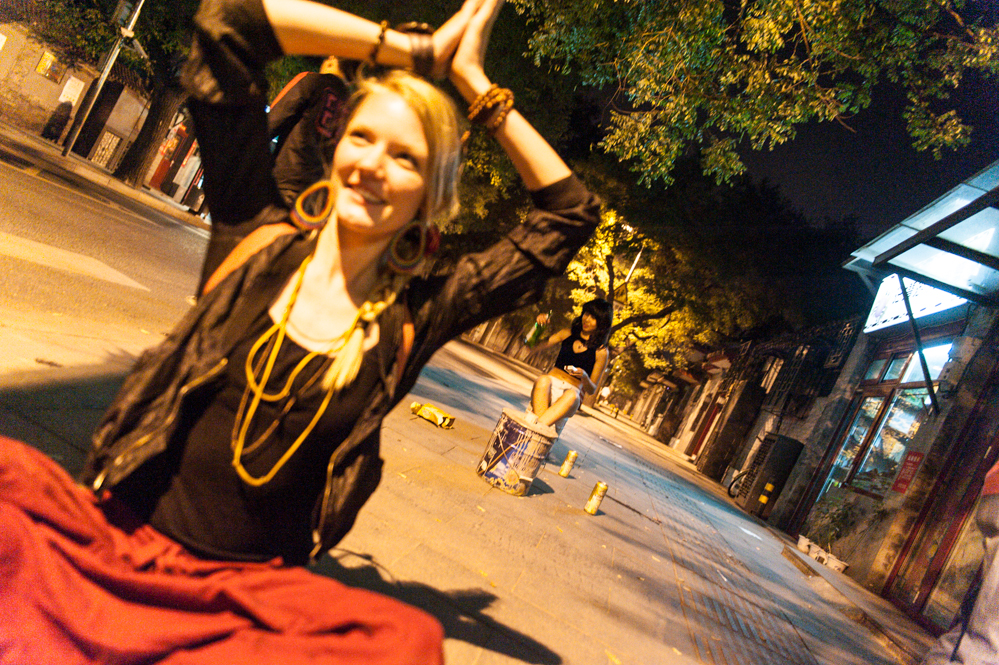 I still want to state clearly that I do think that everybody can wear whatever they want. This is a right we all have. And! There is a big and here. – Anybody telling me what I can and cant wear, will probably get them kneed in the crotch or smacked in the face. Metaphorically. Probably both. Anyway, I cant really make a case here sooo, uhm, moving on… The singer had a lot of energy! Which was really fun to watch and made great shots. The second band called She never sings our songs, was amazing. I loved them. 3 guys and a girl, mid 20s, playing Sigur Roos inspired instrumental tracks. So beautiful! I got their stickers and a group shot! Stoked!

The usual case for this specific bar, seems to be that you don’t drink the beer from the bar. Instead you just use the benches outside and get your beer from any of the 24 7 open Chinese shops on the street. Its a big tourist street for Chinese country siders. Its pretty dead night time. Day time its filled with Chinese tourists from all over the country purchasing all kinds of souvenirs from the big city for their countryside families miles upon miles away. Even though it seems completely kosher to get beer from the shop, I still decided to get it from the bar. If you like something, help it survive. Weirdly enough, the place seemed fuller after all the bands had finished. After 2 am I got really drunk with The Irish Guy. He kept falling over every now and then, but he stuck to “I meant to do that”.

I got into a minor argument with one of the close friends to the owners. Since it is a SKA, Reggae, Punkrock bar I thought Amy Winehouse was appropriate. This guy though, had the nerve to call her pop. Bah, freaking people.. I told him that “Only a person who doesn’t know Winehouse, would call her pop” We agreed to disagree. Didn’t take long until I had some control over the playlist and put on Amy Winehouses SKA covers of Monkeyman, You’re wondering now and Mark Ronsons Valerie. While these songs were playing The Irish Guy and I were pirouetting around the dance floor and then we were dancing outside on the street. The bar had all its windows open so the music was still loud and clear. We put on a little dance show for everyone drinking shop beer on the benches. Later the guy who had been calling Winehouse pop music, finally agreed with me. We even got a little thank you for making everybody happy. I mean, our dance show was pretty epic and awesome.