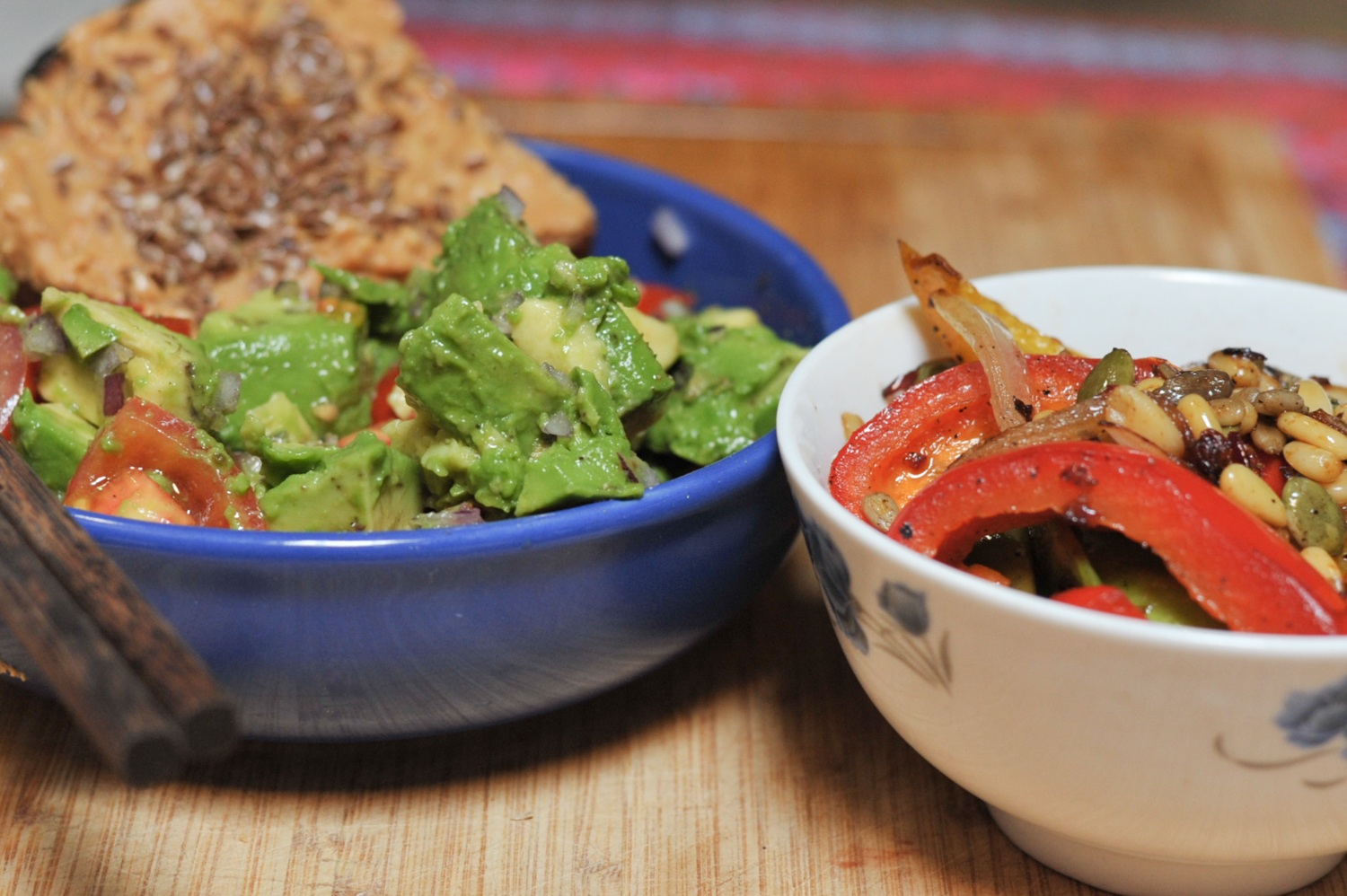 To convert to vegan, is laboursome. And sometimes, I lose my shit. For a vegan lifestyle to work well for me, for it to be a blessing rather than a curse, I need to make one big change. Start planning a head.

It is hard to move away from old thought patterns, no matter it being about food, behavior and tolerance, inner monologues or arguing with parents. It all goes down the same way, roughly. New ideas needs to be manifested, just like the olds ones has been. Each time a thought is thought, the tracks for that becomes stronger in your brain. The stronger the tracks, the easier your brain will find that thought in situations. This is why they encourage you to smile at yourself in the mirror everyday and say nice things to your own face. My brain needs new tracks to think beyond Parmesan cheese to finish a pasta dish. But you know, sometimes, I too fucking hungry and too fukcing tired, in a too fucking bad mood and just wanna eat something hot, spicy, salty and filling – like a “Pastalasanna” or Lasangasanna and have a nap. No mac and cheese with no cheese will be satisfactory.

Knowledge to create the same feeling of a “Proper meal” is lacking right now, even though I am good in the kitchen. My brain just needs a wee bit of re wiring.

Todays breakfast, lunch and dinner, needs to be decided yesterday.
Or even better, the day before that. But hey, I gotta learn how to walk before I can run.

For the last month I have abandoned most animal products, but I am not a vegan. Vegetarian diet was easier in Sweden than in China. Also guilt free meat products and eggs were available. My money was not supporting any “natural slavery” when I was buying organic produce. I thought. But over the years, I have been contemplating a lot about existence itself. What is consciousness?

And after thinking about this since I was about 12 years old, I am starting to feel I am getting closer to a truth. My truth. My current view is something like this, we are all the same. More and more am I starting to feel I belong to those people saying eating carrots is to murder them.  Hah, yes and no. It is a complex equation which can not be explained so simply.

You see, the life circle of everything, conscious or not, stilleben or not, is to become and be gone. To sprout and to wither. To build strength, lost strength. Black holes, the universe, plants, animals, us. Everything that comes into existence, is supposed to leave eventually. This apply to our planet, our star the sun, all planets in this solarsystem, eveything in our galaxy and everything is this universe. Leave, as in change shape. As in, move on. Death is not hard for the one dying, but the others still here. Because we dont know where he she went. We have ideas to comfort us, like heaven, but this one is not working for me. It is not the truth, it is just a nice story to tell children. No matter where we go after Earth, we are all just lucky to be here.

Enjoy it. You won the frigging lottery and were given a body. Congratulations.

It is even human, so you have about 80 years which is a lot. Not as much as a tree, but your life gives you more than you would have been given if you were a tree. First of all, you are conscious on a whole other level than the tree is. The tree is aware of light and dark, the gravitational pull and temperature. But you, of everything – if you dare to think about them. You can also move faster than the tree. You can travel, communicate, think, learn, experience bodily sensations from emotions, touching, sex, exercise, food. It is a complex thing, because through consciousness and a body with so much nerves, sells, blood and tissue – suffering is inevitable. Longing, loving and losing. So in that sense, the tree is lucky. Just grow bigger and bigger, get most beautiful for every year, even after a 100. Most other living beings can also experience everything you can from within the body, but are limited in what they can do and create. That is the difference.  When it comes to certain sea creatures, I dont have a clear idea of how aware they are. How much are they like the tree, and how much are the like us, the animals. Where are they in terms of wanting more from life then just to be alive? Atleast you share the  joy of a cozy place to sleep, having children and giving them kisses and the joy of basking in the sun with the animals you eat. The animals treated with as much respect as the slaves got.

The wrong part with slavery was never the part that the people worked, but the conditions they were kept under. I feel the same about eating animals produce. Women had to fight for their rights to be outside the house, to vote, to work. The animals cant fight us. We have to fight for them. This is why I think, we are here. To keep harmony. We can read into right and wrong. We can empathize with hunger, stress and worry. The animals are too within themselves, to think about the others. We, the humans, can bridge that. The plants are alive and aware as long as they are connected to earth with their roots. We are alive and aware as long as our bodies as intact. They get their nutrition from earth, we too, but first it needs to put inside our bodies. The plants body is the earth. Therefor it is dead as soon as it it picked up. And it is ok, because the other carrots are not grieving the loss on any emotional level, since they don’t hold emotions. They are only aware to same point as the tree: enough to adjust to environment to keep growing.

So, when walking through a forest, one is not walking among individual bodies but one. Imagine the forest being the mane of the earth. The trees are connected through their roots, working as one entity in favor of earth to hold water so he doesn’t dehydrate and die. They are communicating to each other through those roots, and sending each other nutrition when needed. The big trees work as mothers and reach the farthest from self to others. Recently, I started greeting trees. Not formally, but internally acknowledging their presence. Incase they can feel it, hah. Aah, damnit, now again… Sometimes I hear my voice mouthing things I think or write, and Im like “Whaaat the damn hell are you fucking saying crazy lady?” and I wonder if I’ve gone mental. But nah, I aint mental! I have just, over the years, picked up on the mantra one love. Buddha wants all of us, to extend our empathy and caretaking from ourselves, and far far away from us as if we were sitting at the top of an umbrella, protecting everything under it. Plants, animals, even insects. The more I pay attention the processes within other around me, even cochroaches in house, the less alone I feel. The more beautiful this world is. The little roach looks completely different from me, but in his head he isn’t. If I was limited like him, in terms of brain and body, I would probably learn great survival skill from this roach. Even though, he fucked up a bit getting stuck at the bottom of my dog food bag. No way to get out from there, until you get a lift with the orange scoop that comes down from the big hole of light twice a day. People My point is this, I encourage you to greet the trees with a nod, don’t break their branches, but please climb and hug them, and enjoy the idea of how many stories they’d have if they could communicate with you.

Yes ofc it is silly out of a rational persons perspective. But It is insane, how comforting it is to hug a fat a tree. Truly feels like a mom, so why not just enjoy it? Just hug the fucking tree.

After getting to know Lee more, who is this very wise and kind soul from Xin Jiang, China. Noticed he was eating a bowl of veggies with rice and asked if he was vegetarian. Turned out he was in fact vegan, but didn’t hate much to say about it, just told me to watch this documentary called Beyond Carnism. People “living green” usually gives a whole lecture when asking the tiniest thing, so this was different. So ofc I watched it. And I totally understood the message. The animals are en natural slaves to us human still today, just like native Americans, blacks, and women has been. Socially accepted in society that they are suppressed and treated as if they have no valuable perception of anything. As if they simply don’t matter.

That’s the thing.. Maybe they don’t. To individuals. But where does it say that the person who doesn’t like them should be in charge of their fate? That’s fucked up. That’s a bit like putting the old lady yelling at everyone for speeding, to run the local carwash. Will she, or will she not take every opportunity she can to shame them she recognizes?! She will! And she should! But, cant someone else run it instead? Since idiot drivers has feelings too, and maybe this beautiful day isn’t the time… ? Or then the lady should be encouraged to yell at them since nobody else friggin will. Have at it lady!

I am not vegan, like I said. I put cow milk in my coffee (How else do I get the morning coffee I have been drinking for the past 10 years! Soy latte is good, but I dont want latte in the morning. Like most scandinavians, I want a full bodied strong coffee that’s hot as hell with a dash of milk to make it perfectly smooth and remove the bitterness. Milk does that for coffee, so what do I do? I also fry the occasional egg when I am starving, eat noodles here at restaurants in Beijing, the malatang for example, which has a stock most likely made with bones and or meat.  Once got a piece of chocolate cake to my soy latte thinking I was “doing right”, blissfully unaware of how the cake surly contains at least 2 eggs.

Then recently I discovered this woman called Sassy who runs VeganCoach.com. Naturally I signed up for her news letter and decided spontaneously to cook for the competition she was running over the weekend. It was due yesterday so I am too late with sending this in, but it doesn’t matter.

Some of the ways to add contrast to the meals you create include:

Color (if your main dish doesn’t have a lot of color, add some with the garnish, a sauce or a side dish);
Cooked states (playing cooked against raw);
Density (the difference here is between heavy and light);
Flavors (for example, sweet vs. bitter or spicy vs. sour);
Moistness (wet vs. dry);
Temperature (hot vs. cold);
Textures (crispy vs. soft).

My dish was great. Killed it.